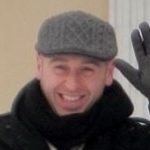 Love the shape and style of Panerai watches, but for one reason or another, aren’t ready to drop that much coin on a watch?

Well you’re in luck: in this article, we’ve rounded up 19 watches that look like Panerai.

A Quick History of Panerai: How Utility Can Lead To Uniqueness

Panerai began life in 1860, in a small watch shop in Florence that belonged to one Giovanni Panerai. After the discovery of Radium in 1898, Giovanni’s grandson found a way of using it to illuminate gun sights for the Italian military. This luminous paste would later give its name to Panerai’s most popular collection: Radiomir.

Soon after this, Panerai became an official supplier of technical and precision equipment to the Italian Navy. It is this heritage that Dino Zei adopted when he took over the company in 1972 and upon which he based the unmistakable designs he offered the public in 1993.

There is also the (probably-apocryphal) anecdote about how Sylvester Stallone fell in love with the Luminor design while filming his 1996 movie “Daylight”.

As the Italians say, “Se non e vero, e ben trovato” (“Even if it’s not true, it’s a good story”). Panerai’s sales boomed after the Luminor’s Hollywood debut, and people have flocked to the Italian brand ever since.

For the upcoming list, we’ve put together a collection of budget and not-so-budget timepieces that range from watches that imitate Panerai’s style to ones that rival it for technological finesse.

So, take a look at our 19 watches that look like Panerai and see which of them take your fancy. 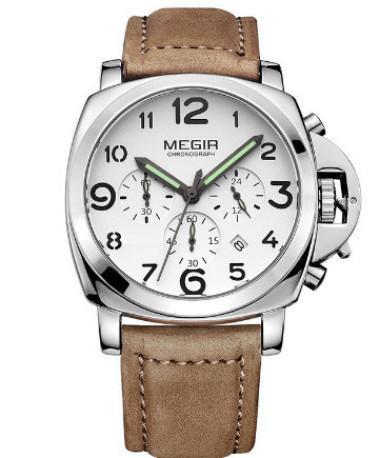 Megir is a Chinese brand that makes ‘homages’ to the more famous watch brands at a fraction of the price. According to reviews online, their ‘Japanese Quartz’ movements are reliable, they use Seiko’s Hardlex mineral for their crystal and the 44mm case is water-resistant to 30m. If you’re looking for a very cheap addition to your collection then this could be a decent option. 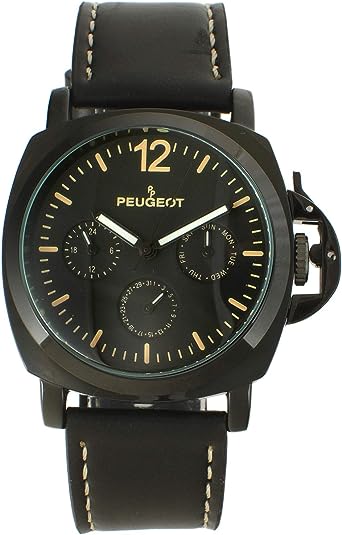 Peugeot may look like just another ‘affordable luxury’ brand but they actually go back to 1957. Since then, they’ve backed away from creating luxury watches and now stick to making homages with decent Japanese movements inside. If the Panerai style is what you’re looking for then the Sport offers that and a little heritage, too.

Also available in blue and brown that looks like the Panerai Luminor Marina! 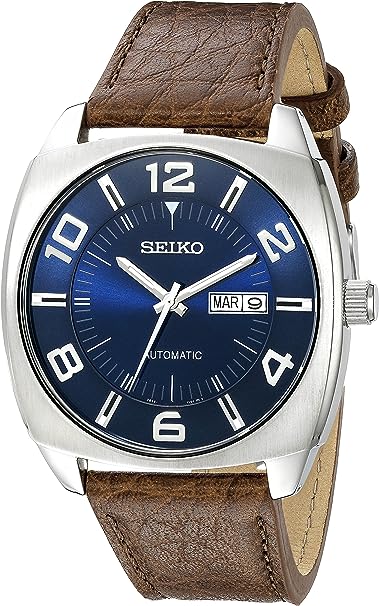 If you’re more of a Radiomir guy then this 43.5mm Seiko might be the right fit for you. It has that distinctive cushion case and a distressed leather strap that really sets it off. It also has an in-house automatic movement but, whatever you do, do not try and take this one diving! 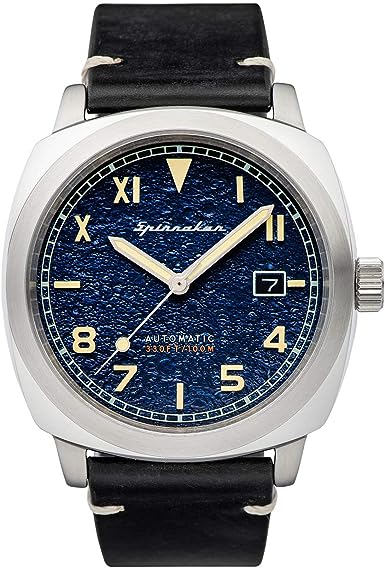 The Hong Kong-based brand Spinnaker is slowly gaining renown among online watch reviewers for the quality of their build quality at such low prices. The Hull has a 42mm cushion case and a date function powered by a reliable Seiko NH35 movement. What’s more, it’s water-resistant to 100m so it’ll hold up just fine in the shallows. 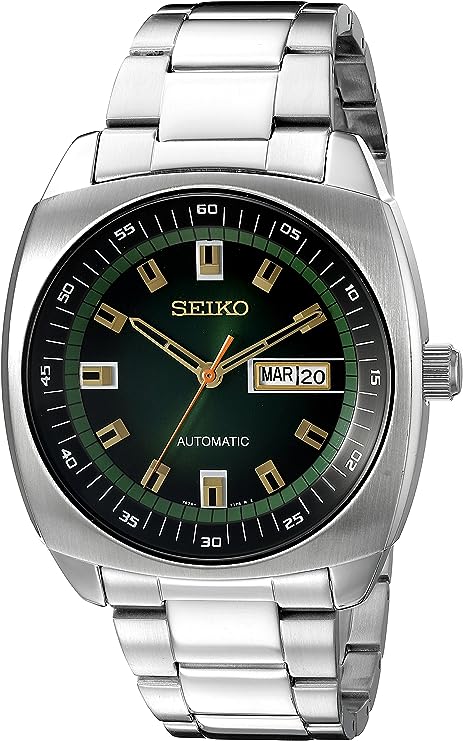 The Recraft color scheme wouldn’t look out of place on a tennis court in the 70s but its build quality is thoroughly modern. Inside its 43.5mm case you will find the Seiko 7S26 automatic movement that boasts a 42-hour power reserve! If that isn’t impressive enough, there’s also the Hardlex crystal and exhibition back so you can both see what drives the watch and know that it’s protected by sturdy stuff. 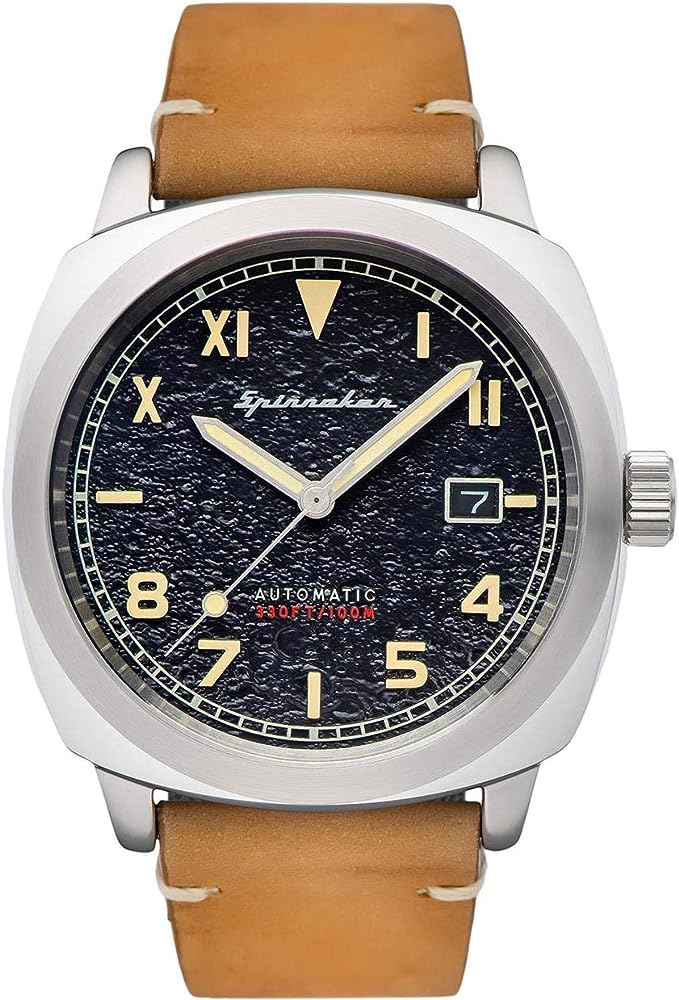 If you like the Radiomir California then you’ll love this Spinnaker. It’s the same size as the previous model and contains the same movement but it sits very close to the wrist for its size. What really makes it stand out, though, is that beautifully textured dial against a background of clean lines and smooth finishes. 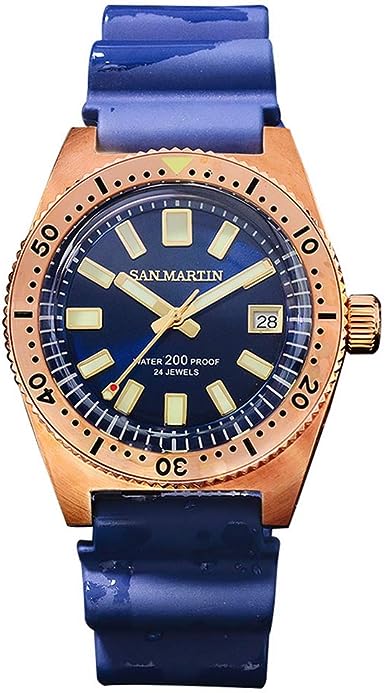 Even though the lines on this San Martin aren’t as bold as you might expect on a Panerai, it definitely has that Submersible touch. Behind the synthetic sapphire crystal is the same Seiko movement as the previous two and it boasts an impressive 200m water resistance. What I love most about this watch though, is its 40mm bronze case which is designed to benefit from an oxidation process that will eventually make it look like some vintage antique worth ten times the price you’ll pay. 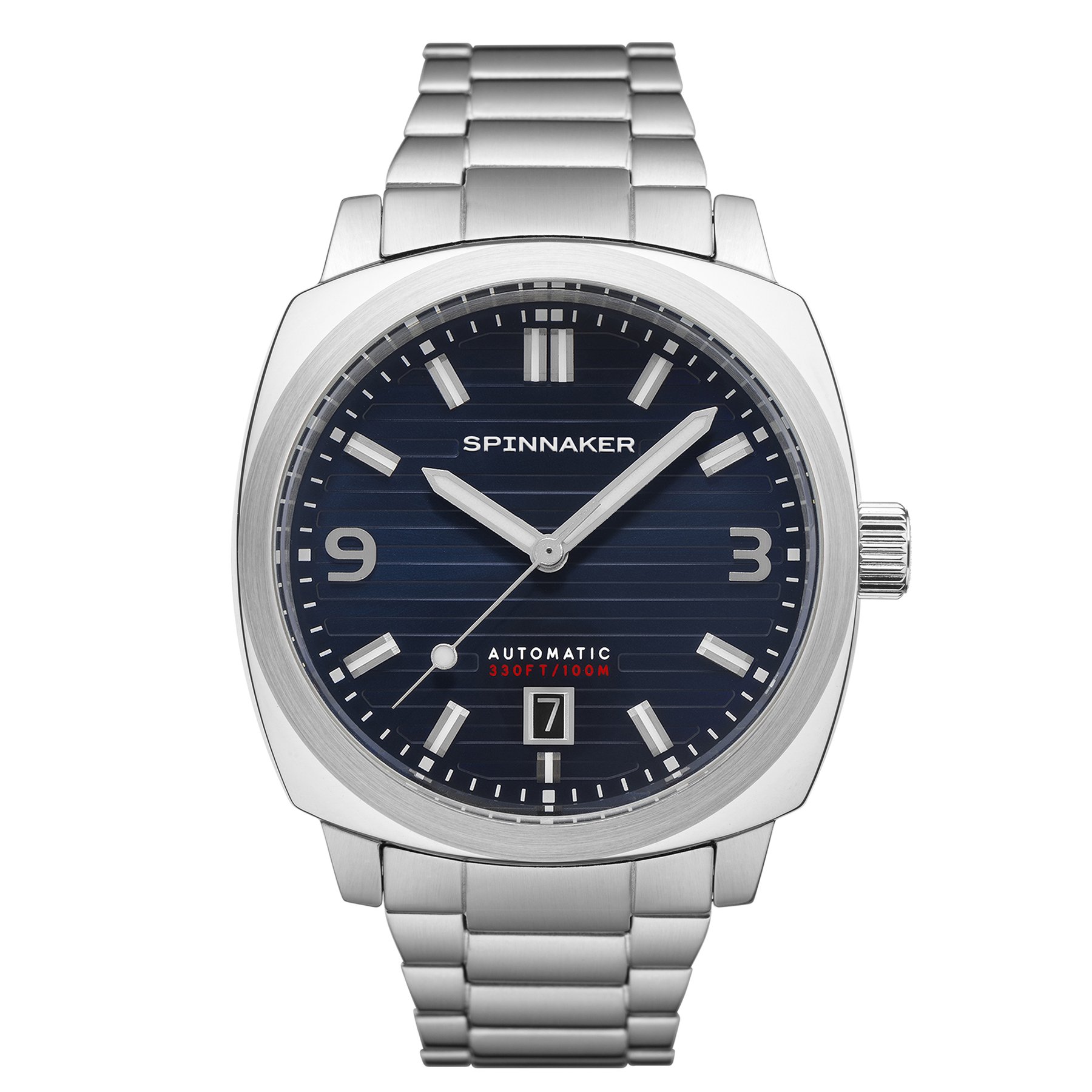 If you’re in love with the Radiomir’s cushion case then this is a great option at a much less bulky 42mm. Apparently, the lines on the Aegean blue dial are inspired by yacht decking and, with its 100m water resistance, you wouldn’t need to be shy about having it near water. It’s also got a decent Japanese automatic movement you can see through its exhibition back, quite a nice touch for the price! 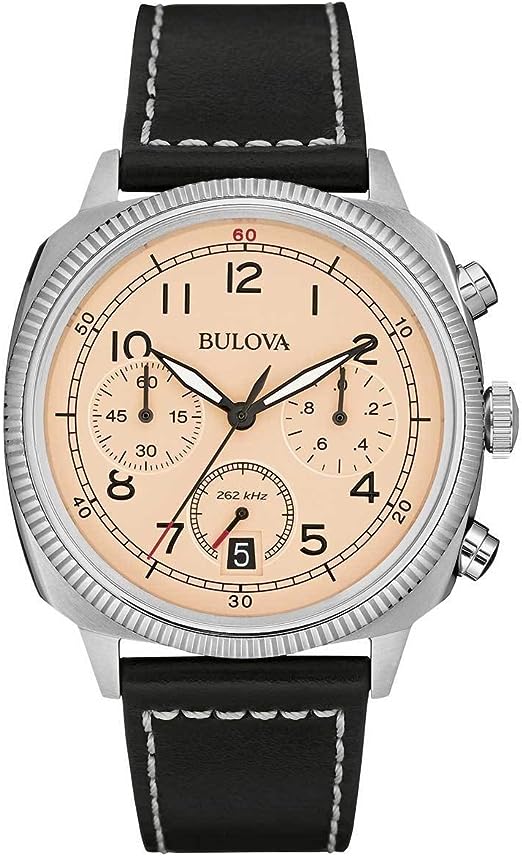 There is so much to love about this watch it’s difficult to decide where to begin. The prominent bezel over the 43mm cushion case gives you the impression you’re looking into a ship’s porthole and there’s plenty to see inside. The date window at 6 o’clock, the screw-down crown that gives it added water resistance, and the touches of red that add that extra touch of brashness to an otherwise sedate color palette. 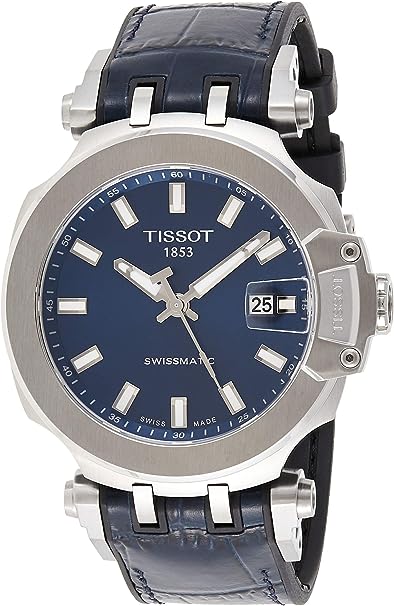 At a whopping 49mm this is not a case for the faint-hearted (or faint wristed, for that matter)! According to Tissot, the T-race’s massive bezel is inspired by a car brake disk so it’s definitely more of a racing watch than a diver. The Swiss automatic movement behind the scratch-resistant sapphire crystal is nothing to scoff at, either. 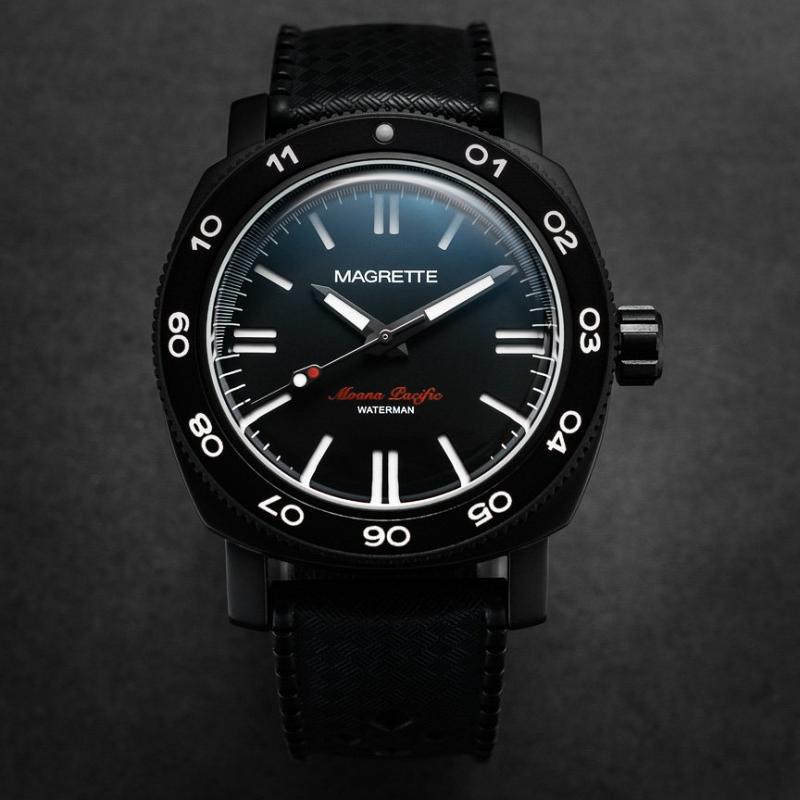 This microbrand from New Zealand has been gaining a lot of traction among watch collectors and reviewers in recent years. Part of that is down to the care they take in choosing their Citizen/Miyota movements, which in this case offers a 42-hour power reserve. Another part of their appeal is the variety and quality of their designs, so you really don’t want to miss out on the rest of their collection. 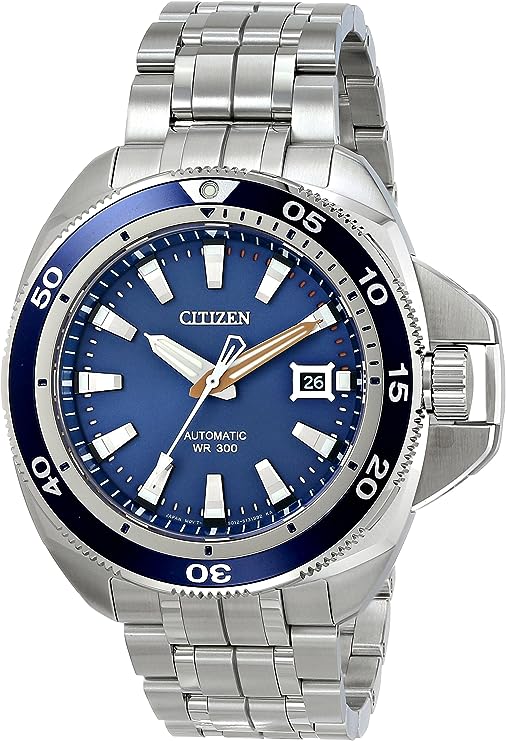 Moving away from the more ‘leather armchair’ watch and into the ‘space-age cockpit’ style. The NB1031-53 has all the most reliable and impressive technical specs you could want for an automatic watch in this price range. It also has that imitation crown guard, making the case a bulky 44m, for those of you who enjoy feeling the weight against your arm. 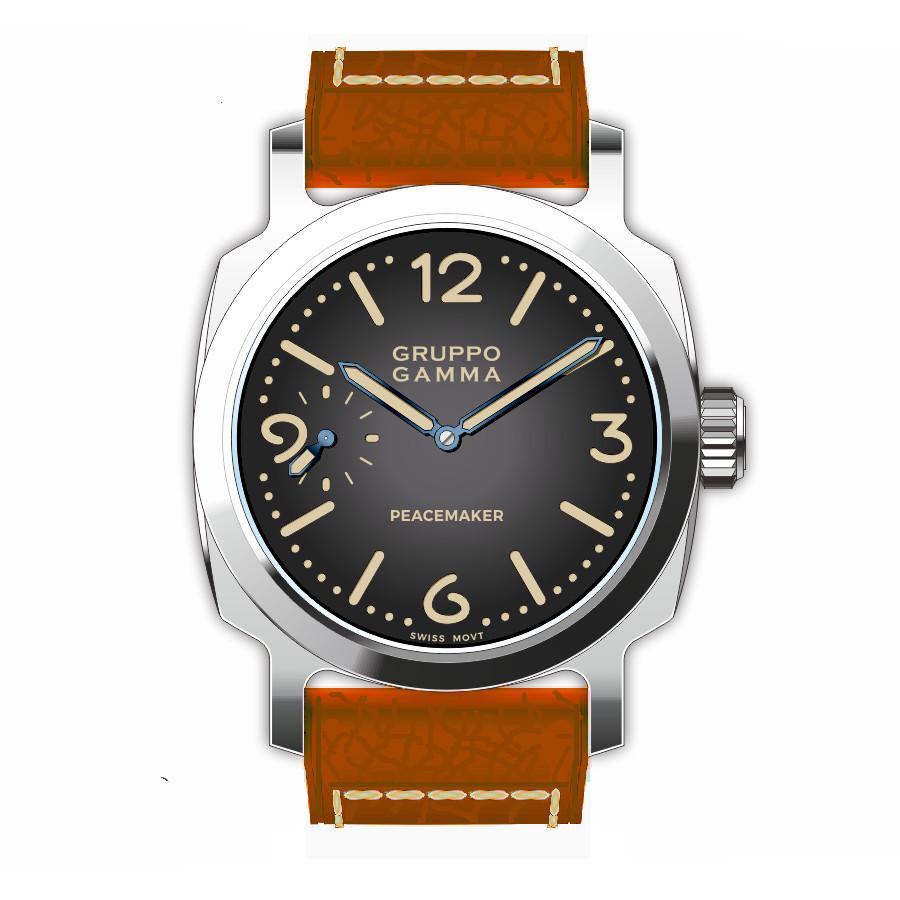 This Singapore-based micro brand prides itself in using only the very best Swiss ETA movements and other quality materials. Naturally, this adds a little to the price but with a 42-hour power reserve and a 200m water-resistant 42mm case you get a lot of bang for your buck. Add to that the fact that ‘Gruppo Gamma’ was the name for the Italian Navy ‘Frogmen’ whom Panerai used to supply and you’ve got more than just a little nod to history. 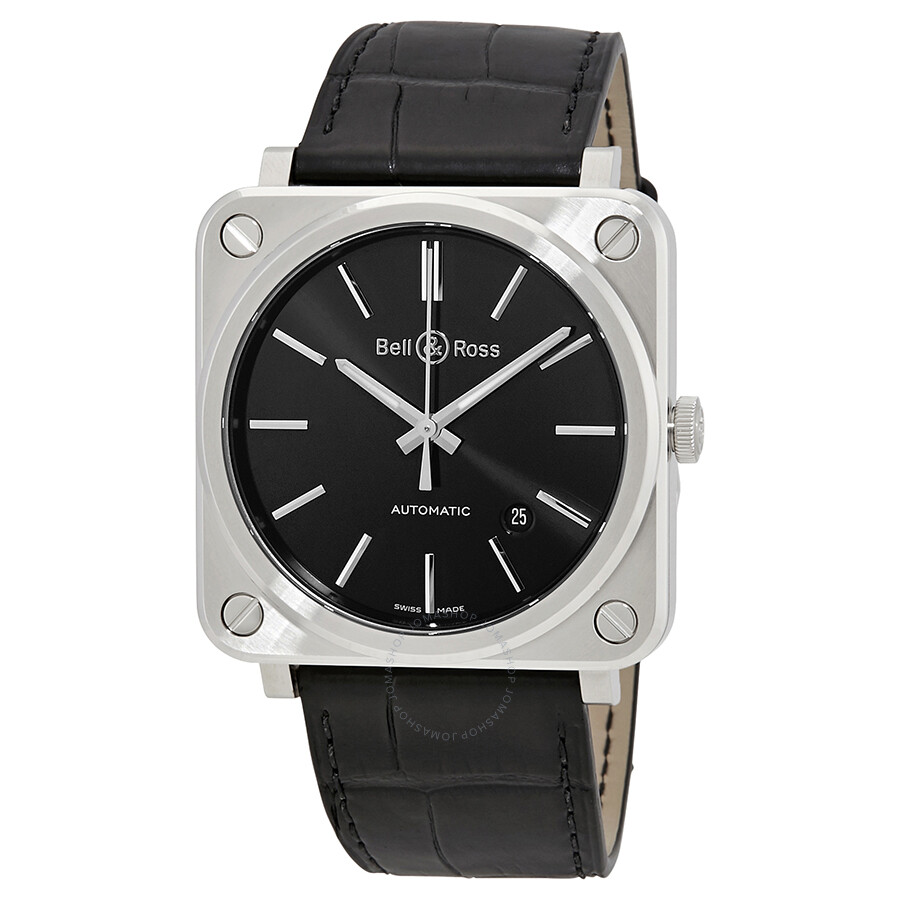 Just like you can spot a Panerai from 50ft away, you’d be hard pushed to miss a Bell & Ross. The BR-03 92 has a 39mm case, making it a little more subtle than your average diver but the functional aesthetic definitely makes it stand out. I bet you barely even noticed that date window either, did you? You won’t be able to miss it, now. 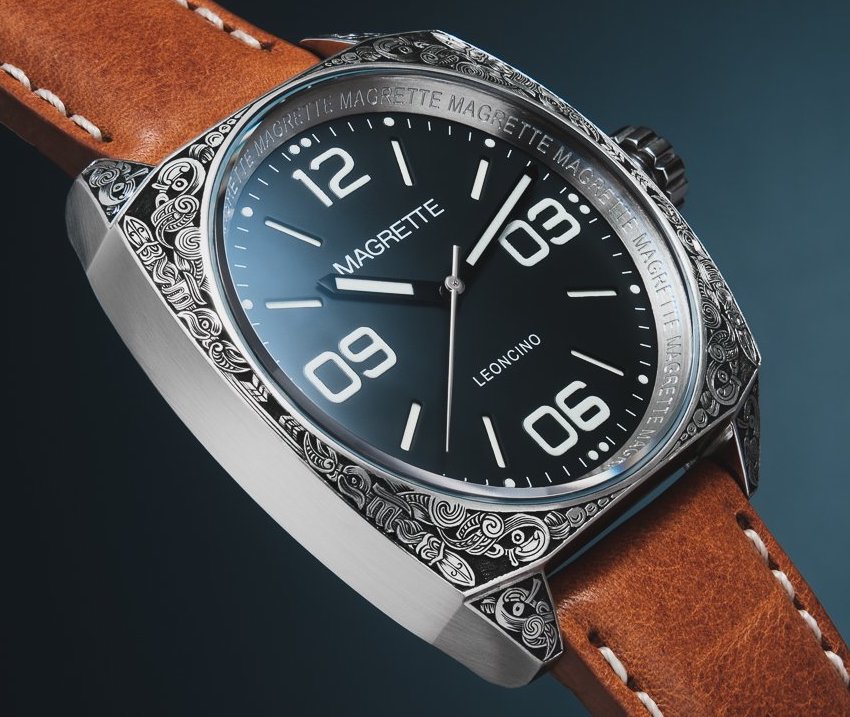 Didn’t I mention not to miss out on the rest of the Magrette collection? Well, the Taiaha is the perfect reason not to: the 42mm cushion case is hand engraved by Christchurch master Andrew Briggs, resulting in a spectacularly unique blend of Maori art and Swiss artifice. Get in there quick, they’re only going to make 10! 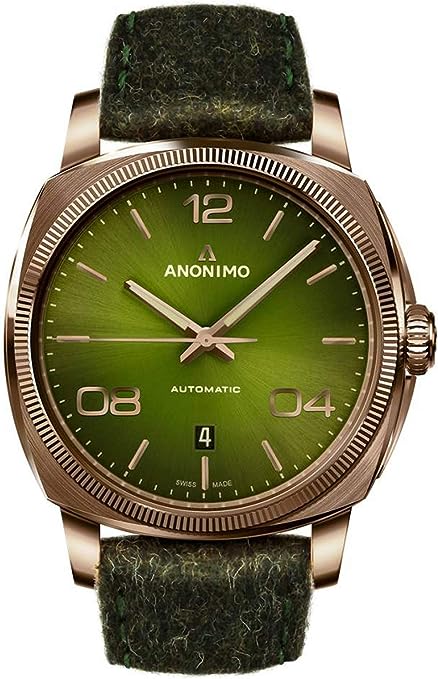 Back to the classic Italian style and no wonder, Anonimo is based in the same Italian city where Panerai started. The 42mm cushion case encloses an excellent Sellita movement but it’s only water resistant to 50m, so don’t get carried away with ideas of snorkelling. This is a dress watch but that is by no means a snub of its quality. 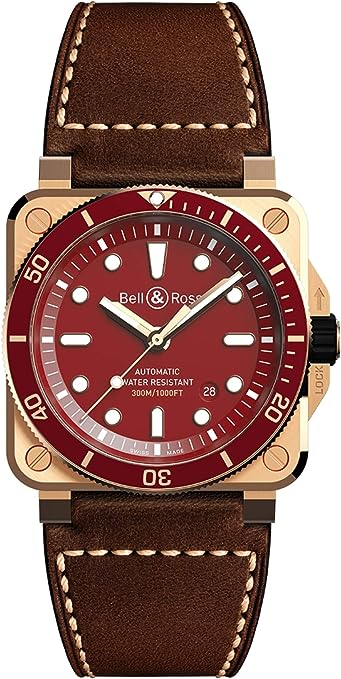 Although the Diver Bronze is limited to 999 pieces, it just had to appear on this list. It contains many of the same specifications as the ‘unlimited’ version above, including the modified Swiss Sellita movement, except it’s also water-resistant to 300m and it has that exquisite crown guard, too. Whether you’re swimming underwater or having drinks over the city skyline this is the kind of watch that’ll bring you joy every time you catch a glimpse of it. 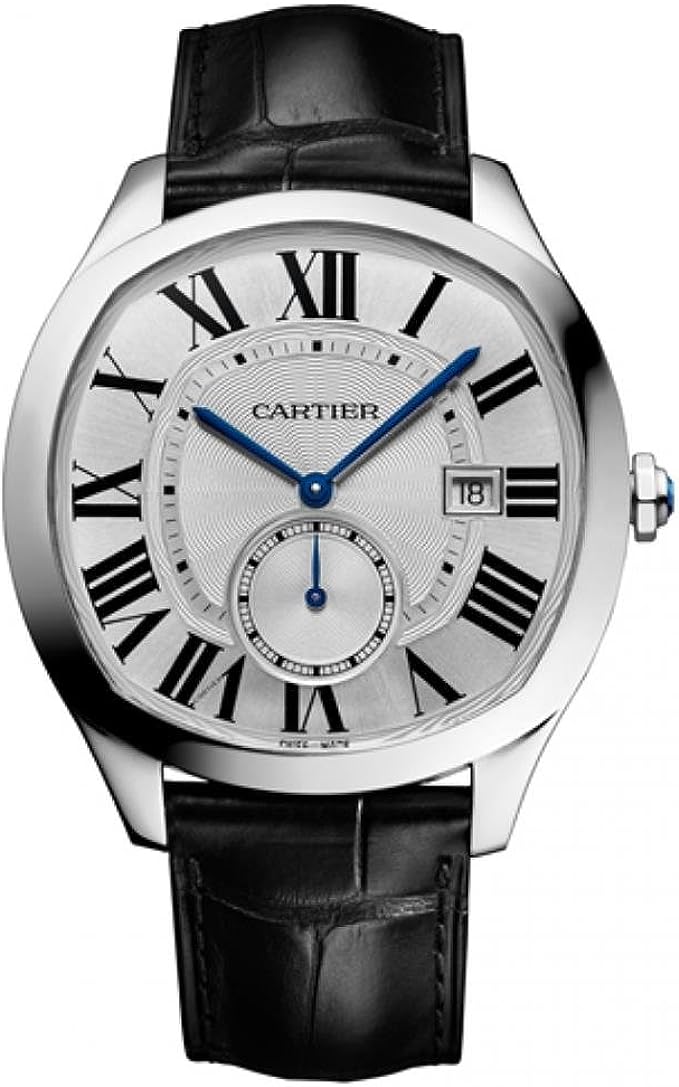 This, on the other hand, is definitely not the kind of watch you want to be taking into the sea. That being said, it may just be the classiest watch on this list, with its stunning cushion case and those sword-shaped blue hands roaming across Roman numerals. There’s also an in-house Swiss automatic movement that offers a 48-hour power reserve, so the Drive is no technical slouch either. 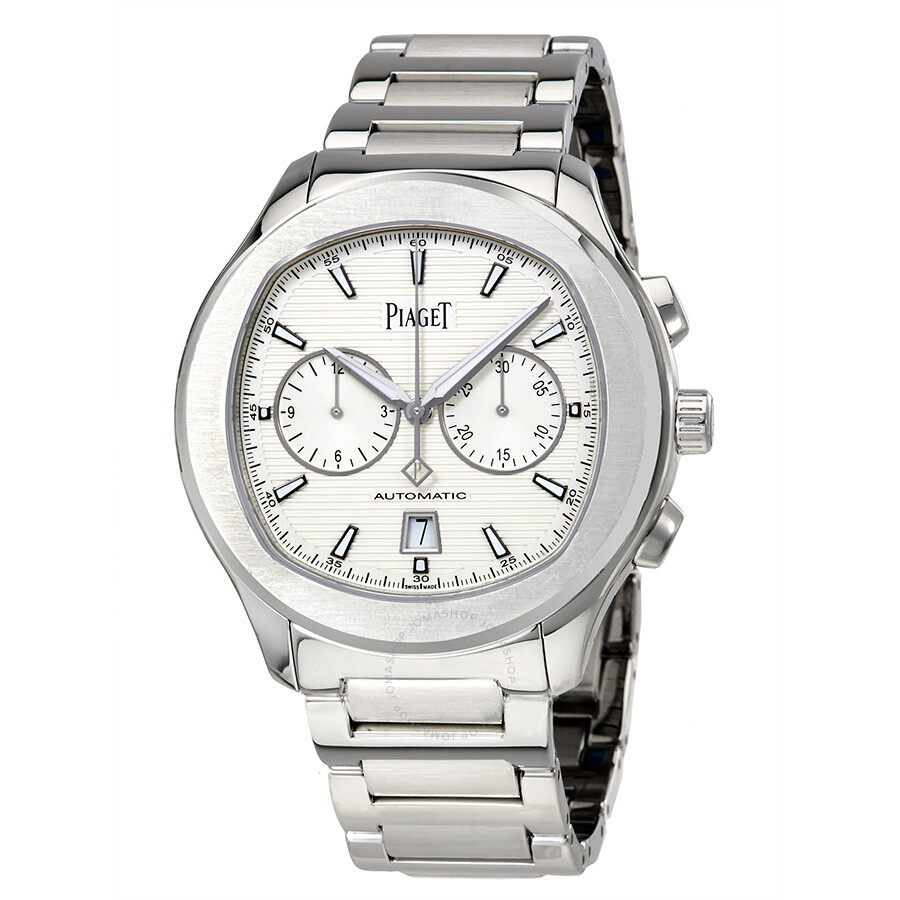 This curvier version of the cushion case comes in at 42mm but you’re probably not going to want to take it closer to any other liquids than a dry martini. Its in-house Swiss automatic offers a 50-hour power reserve from behind its guilloche dial but the Polo’s style is what separates it from most of the pack. Everything from its smooth pushers to that statement of a date window exudes an effortless beauty that’ll make you glad you paid its hefty price.

So, What Is The Best Watch That Looks Like Panerai?

Well, there’s a lot to choose from and it depends on what you’re into. Rather, are you a fan of the sporty Luminor Panerais or the more charming Radiomirs?

If you like the bulk and heft of the Luminor then the Megir is an excellent option just on visuals alone. Of course, I wouldn’t feel all too comfortable recommending this watch to someone looking to do anything more than snorkel, even with that crown guard.

If you’re looking for a more serious dive watch in this collection, then see if you can get your hands on one of the Bell & Ross watches (preferably the Diver Bronze). The technical specifications tick every box and the best thing about them is they’re distinct timepieces you could wear anywhere.

If your style is more in line with the Radiomir aesthetic then I really can’t recommend the Magrette enough.

The build quality both inside and out is exquisite and it’s one of those microbrands you’re probably going to keep returning to when adding to your collection.

Do You Have A Favorite?

Get in touch with us on Instagram and let us know which one you’ve gone for!

Ask Cladright: What Is the Average Man’s Wrist Size?